At the Washington Department of Retirement Services, the pandemic has been anything but a quiet time. Instead, the department has plowed ahead with plans to replace core pension systems and remodeled its space, said Tracy Guerin, its director.

At the Washington Department of Retirement Services, the pandemic has been anything but a quiet time. Instead, the department has plowed ahead with plans to replace core pension systems and remodeled its space, said Tracy Guerin, its director.

The 256-person department has 35 to 40 people who have come into the office throughout the pandemic to process cash and paperwork and perform other non-automated tasks. Additionally, small project teams are already working a limited number of days. And between now and March, the office will slowly begin to fill up again.

“You can't stay closed forever. You've got to reopen the building,” Guerin said in an interview. “We're just trying to do that in the most responsible way for our customers and our team.”

DRS is proceeding in stages, “deliberately and intentionally,” as Guerin puts it. For example, retirement specialists are returning two days a month in November, and the plan is for them to be in the office four days a week by March. In addition, however, most employees will be eligible to telework two days a week if they wish to do so.

The DRS will open its reception area to foot traffic on December 1, enabling members to drop off paperwork, get answers to basic questions, and schedule meetings without requiring an appointment. However, Guerin is hesitant to say when full, in-person meetings with members can resume. “We need to get through cold and flu season first,” she said.

Guerin said that September and October were hectic months as the October 18 deadline drew near for state employees to comply with Governor Jay Inslee's vaccination mandate. The state Office of Financial Management reported October 25 that about 2.9% (1,785) of employees left their jobs or were terminated due to the mandate, and 3.1% (1,941) were pending action, which includes being in the process of being vaccinated, pending retirement, pending accommodation, or separation.

In addition to dealing with a bubble of retirement requests, the department has been working creatively to engage team members.

For example, the DRS conducted drive-through lunches in May and September. At each one, employees drove into the parking lot and queued up in their cars to pick up a gift and receive a lunch they ordered. 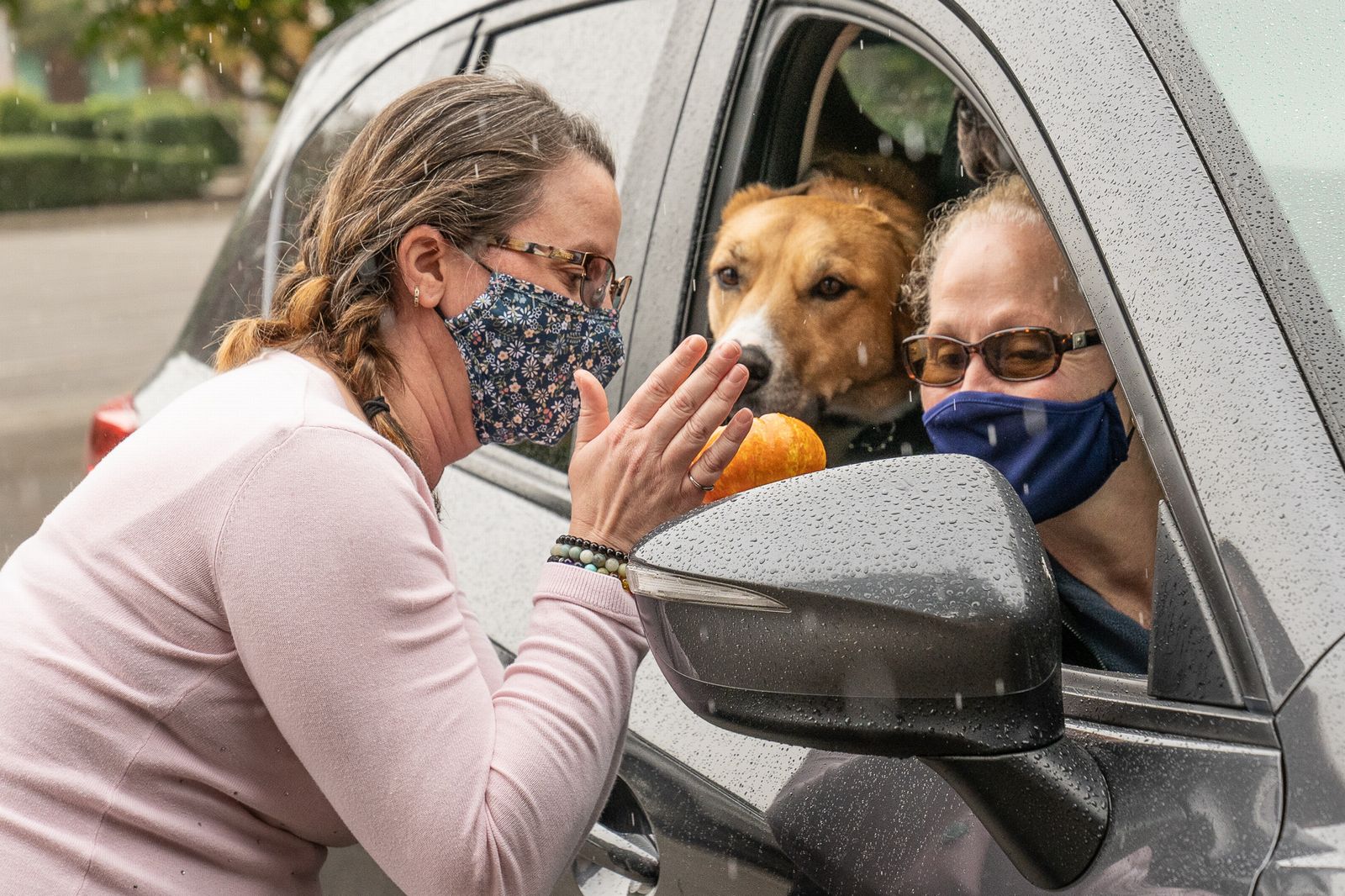 “By doing this, we get to visit with them and see whoever they brought along for the ride. We've met their dogs, their kids, their spouses, their moms, and dads,” Guerin said. “We could  unmask if we were six feet away. It's been a great way to maintain our culture, togetherness, and sense of being a team.”

Drive-through lunches gave Washington Department of Retirement Services staff a safe way to see and be seen during the pandemic. Pets and family members were welcome to come along for the ride.

DRS has also conducted Zoom lunches by allowing employees to choose a restaurant to order from. Meals were delivered via GrubHub in time for team meetings.

Since January, the agency has added 19 new employees , and it was able to conduct in-person training in a large conference room. It has also held Zoom calls for new workers to meet employees who have joined in the most recent two months, using fun questions as prompts to get them warmed up and help them meet colleagues.

Guerin is certain that some changes will linger even after employees begin returning to the office across the board. “Hybrid work is here to stay,” she said. “But we as leaders have a huge challenge ahead about how to lead in a hybrid workforce. It's different, and I'm not sure we all understand it yet.”

She also sees a definite upside, including a sharp decline in driving in the state capital of Olympia. “Hopefully, the lowering of greenhouse gas emissions is here to stay. It's been nice to have fewer traffic jams.”