In his opening remarks McElligott talked about the need to educate the public, government officials, and the media about how well funded most public employee pensions are. "This year," he reminded the audience, "of the 71 public pension plans that have submitted their 2009 contributions, only 32 reported paying their full pension bill. Government budget crises are not our fault." Presentations from the conference are available on this website by clicking here.

A keynote address was delivered by Robert M. Maynard, CIO with the Public Employee Retirement System of Idaho. Maynard discussed "Long- versus Short-Term Market Investment Strategies." He compared the conventional strategy to the endowment model, including a stress test comparison of the two models during the "Great Collapse" of 2008-2009. He also discussed concerns around hedge fund investing and issues around Public versus Emerging Private Market investment.

Also addressing the group was Morton Kondracke, executive director of Roll Call, the Capitol Hill newspaper, who gave an up-to-the minute look at American politics, including the November elections. Dan Crippen, former director of the Congressional Budget Office, delivered an overview of the current health care debate and policies and spoke on options for repairing America's ailing health care system.

During the conference the members also elected the following officers to one-year terms:

For the third year the NCPERS Charitable Foundation raised funds for a worthy organization in the conference's host city. The campaign in Las Vegas resulted in contributions of nearly $40,000 that will benefit The Public Education Foundation, a nonprofit dedicated to improving public education in Las Vegas.

Education for New Trustees at TEDS 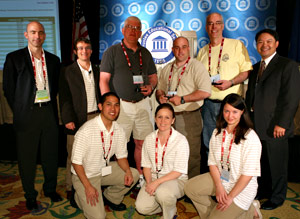 As a sign of NCPERS'' continuing commitment to training, the organization again hosted the highly regarded Trustee Educational Seminar (TEDS). TEDS, which benefits new and novice trustees who are seeking to learn information and skills that will allow them to better serve as fiduciaries for their pension funds, covered topics such as the public pension promise and its implications, elements for all trustees, best practices, actuarial issues, WEP and GPO Offsets, and legal issues for new trustees.